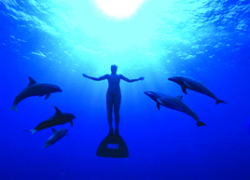 While we are all feeling very compassionate toward Japan right now in light of the recent tsunami, an important environmental issue involving Japan will be presented Tuesday evening, June 21st, at the Rafael Film Center that paints some Japanese fishing practices of killing whales and dolphins in a less than favorable light.

Filmmakers Ric O’Barry & Louie Psihoyos will present their film, The Cove, which won the 2010 Academy Award for Best Feature Documentary, in a benefit to raise money for Save Japan Dolphins, a non-profit project sponsored by the Earth Island Institute with the goal of promoting eco-tourism as an alternative to the killing whales and dolphins. It’s an amazing tale of eco-activism, with the film-makers themselves having actively participated in the sleuthing, free-diving and underwater filming that went into the film production.

Not only will the film-makers be present, but the Grateful Dead’s Bob Weir will also give a live performance! The films lasts 92 minutes, followed by a discussion and Weir’s performance.

Tickets are still available and can be purchased online or at the box-office.