Boyle Park is a wonderful park in Mill Valley with numerous different sections for different activities, ages and interests. There are five heavily used tennis courts, a large play structure (above) in a sand lot, swings, a wide open playing field, and two baseball fields with bleachers.

On a sunny Summer day or weekend during the school year, the park is filled with people of all ages doing all sorts of things. On my visit there were seniors playing tennis and taking tennis lessons; moms, dads and babysitters watching toddlers on the play structure; babies shoveling sand in the enclosed sand lot; pre-teens soaring high on the swings; and adults and kids running across the bridge and around on the field. Everyone looked like they were having a great time. 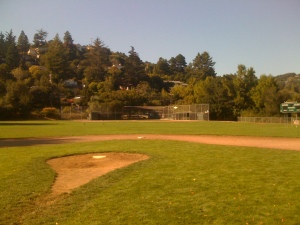 The only part of the park that was deserted were the ball fields, where a lone park employee tended a fence. The fields themselves were immaculately manicured, waiting patiently for the Fall Little League season to start up.

By the way, this is where, in 1973, a girl signed up to play Little League but was denied membership by the National Little League. So, the Mill Valley Little League sued them and, aided by NOW and the ACLU, won the court case. The following year that same young lady became the very first female member of a Little League team. Very, very cool!

Where: Bordered by Blithedale Avenue on the South, Thalia Street on the West and East Street on the East (what a surprise!). (map)

Dogs: Welcome but must be on leash

Parking: Two small lots on either side of the park; street parking